Given the ongoing racial tension in America, it’s clear that the events of Selma are as relevant today as ever. Much has been made of the fact that it has taken half a century for such a film to be produced, and that the Oscars were significantly lacking not only in nominations for this film but for any non-white actor. But I can’t help feeling that not only is this a more important film than Birdman, it will be remembered long after many of the nominated films are forgotten as a much-needed reminder that America, and the world, still has a long way to go when it comes to racial and social inequality.

While criticisms have been levelled at Selma for its portrayal of Lyndon B. Johnson and perceived historical inaccuracies, it brings to the fore the supremely complicated racial situation in ‘60s America and hints at the historical context of these events while documenting the roots of modern tensions.

Johnson must negotiate the political system and deep-rooted institutionalised racism while balancing his conscience with popular American and world opinion. It is his role to represent all American people but also to prevent dangerous civil unrest. The failure of the 1964 Civil Rights Act to prevent de facto segregation and grant access to voter registration demonstrates the complexity of overcoming the visceral and reactionary fear and hatred of many Southern communities and officials towards African American communities.

David Oyelowo’s performance dominates the film; the gravitas and oratorical skill of an iconic leader blend with the humanity of a man burdened with the responsibility of being the voice of the disenfranchised as they fight the system.

When looking at historical events such as these it’s easy to fall into the trap of believing human progress to be inevitable. Selma highlights the passion, bravery and determination of those who campaigned coupled with the political skill of those who led the movement as integral to the progress that has been made in America since the events of the film.

It is also easy to look at these events with a moral superiority and the belief that they belong to a distant past, but events such as the shooting of Michael Brown (in 2014) should remind us that this history has a legacy and that the fight for racial equality continues.

Bearing this in mind I’m delighted that Selma did win an Oscar with Best Original Song going to Glory; not only because it is powerfully moving and the perfect ending to the film but because in their acceptance speech John Legend and Common so eloquently expressed the importance and relevance of this film in the modern world.

“We say that Selma is now, because the struggle for justice is right now. We know that the Voting Rights Act that they fought for 50 years ago is being compromised right now in this country today. We know that right now, the struggle for freedom and justice is real. We live in the most incarcerated country in the world. There are more black men under correctional control today then were under slavery in 1850. We are with you, we see you, we love you and march on”.

Urinetown isn’t the catchiest title for a musical – but then urination isn’t the most appealing subject for a theatre production. Nevertheless, Urinetown does indeed follow the trials and tribulations of a community in its quest to go to the bathroom.

In a Malthusian dystopia where environmental catastrophe has led to prolonged drought, the population is overwhelming the world’s resources. The severe water shortage has created a unique business opportunity for Caldwell B. Cladwell; with private toilets now unthinkable, citizens must pay him for the privilege to pee – or be dispatched to the eponymous Urinetown.

As Cladwell presides over his lavatorial empire, the scene is set by Officer Lockstock. His self-knowing asides could have been grating in lesser hands than those of Jonathan Slinger, who keeps the narration fresh and the action flowing. They do also allow the musical’s dialogue to remain relatively free from unnecessary exposition.

While throwing out some thought-provoking themes and questions – the corrupting influence of power, is history doomed to repeat itself? – Urinetown sometimes lacks emotional punch. This isn’t to fault the cast, who are fantastic. Jenna Russell relishes her role as Penelope Pennywise, giving her an air of Mrs Lovett – interspersed throughout the musical are parodies, pastiches and tributes to musical tropes and there are several Sondheim-esque moments. Richard Fleeshman has leading man charisma as Bobby Strong, leader of the revolution against Cladwell, and the whole cast perform with such gusto that you can’t help but be swept away with them. Run, Freedom, Run – a catchy gospel number – received the longest mid-performance ovation I’ve ever seen.

Urinetown’s slightly facetious tone may sometimes have failed to tug at my heartstrings but its unexpected plot twists certainly kept me guessing. Urinetown is keen to point out that it’s not a “happy” musical. But neither is it a self-indulgent tragedy. Despite its seemingly far-fetched setting and slightly cartoony style, Urinetown is actually quite a pragmatic look at politics and society.

When storytelling, the most glorious revolutions are often the unsuccessful ones. Take Les Mis – there’s a reason it’s set during the 1832 Paris Uprising rather than the more famous eighteenth-century Revolution. Marius and the Friends of the ABC capture our hearts as the underdogs fighting for a doomed cause against the establishment. The rebels of Les Mis die idealistic (if naive) martyrs. If instead of dying on the barricades the revolutionaries had succeeded, who’s to say that there wouldn’t have been a repeat of the violence, war, in-fighting and Reign of Terror that followed the French Revolution of 1787. And that would have made for a very different story. Without giving too much away, Urinetown is no Les Mis, and offers a much less romantic take on revolution.

While it seems ironic that Urinetown opened to a country beset by widespread flooding, it brings home the immediate impact of environmental issues. And the fact that difficult questions – environmental or political – don’t have simple answers.

On a more practical note, it was my first time at the St. James Theatre and I found myself on the front row, not having bargained for quite how close to the action I’d be. If you like inspecting actors’ fillings and don’t mind the odd spray of saliva my seat comes highly recommended, but if you like your personal space I’d think about sitting a few rows back.

Having recently finished Gillian Lynne’s atmospheric autobiography, A Dancer in Wartime, it seemed apt timing as last week I immersed myself in Northern Ballet’s A Midsummer Night’s Dream – set around a 1940s touring production of Romeo and Juliet. This ‘ballet within a ballet’ also seems a fitting plot device for a company so committed to touring frequently and as widely as possible.

Lynne writes in her autobiography about the shortage of male dancers during the Second World War and the diversity of talent that this generated – dancers that weren’t technically brilliant but were consummate performers and exuded stage presence. Diversity is an ethos that Northern Ballet seems to embrace. They aren’t a cookie-cutter company, and each dancer brings something unique to their performances. The diversity of the company, and the strength of their ensemble, makes Northern Ballet productions alive with a character often lacking from companies such as the Royal Ballet.

A Midsummer Night’s Dream really allows the dancers to act – Act 1 features minimal dancing, with a strong emphasis on scene setting and storytelling (and even some dialogue). As I’ve come to expect from Northern Ballet productions, the David Nixon choreography was inventive, eloquent and witty.  A rehearsal video showing the dancers improvising dialogue, establishing the emotions and intentions of their characters, perhaps explains why Northern Ballet’s choreography is so articulate and its dancers so expressive. 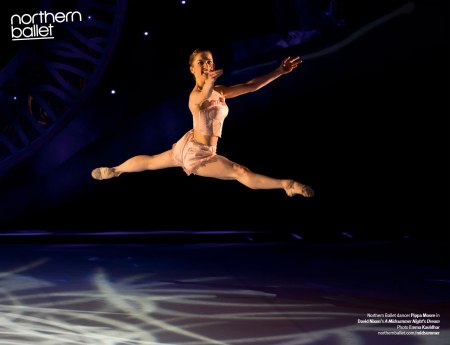 Unfortunately I was sat in front of the kind of elderly audience members who give a stream of consciousness commentary to their lives. Before the performance started I was treated to a range of overheard pearls of wisdom: they were very concerned about the future state of one dancer’s hips as he performed some particularly impressive stretches, and I learnt that one apparent upside of Alzheimer’s is the ability to watch old productions with a fresh perspective.

Once the performance had started it did get rather wearing. The set was indeed ingenious, but comment could probably have waited until the interval. They particularly enjoyed the Act 2 ‘dream’ sequence – finding the underwear, cross-dressing and casual bestiality hilarious. I have to agree that while the whole ballet was strong, Act 2 stood out as a sublime mini-ballet in its own right. And by the interval the ballet had obviously grabbed the imagination of one little girl as she skipped and pirouetted down the aisle.

The general atmosphere was of energetic enthusiasm, and it clearly wasn’t a staid balletomane audience – we had to be repeatedly prompted to applaud the conductor at the start of each Act (I still don’t get why the orchestra gets a special round of applause just for making it to the theatre) – but there was much whooping and cheering at the curtain call.

This is one of the strengths of Northern Ballet – its ability to attract regular loyal audiences but also to diversify away from the traditional ballet audience. Northern Ballet’s Dream is touring into 2014 and I’d highly recommend it!